Hey guys, did you know you can create a secret group on facebook? Well, now you know!

I have been reading a lot of news about teens dropping off facebook. Among a whole host of reasons, privacy is a big one. With more and more parents joining facebook, the teenagers are now switching to good old chat apps such as whatsapp and a whole bunch of new ones which are springing up everyday.

Seeing the trend, Facebook has now incorporated a 'Secret' setting in Groups. Unlike a closed group where anyone can see who is in the group while only members can read the posts, if you use the 'secret' setting, not only are the posts visible only to members but even the members are only visible to members. Which means, if I add a group called Bright Angles and invite 5 friends, only they will know that the group exists and who all are a part of the group.

To set up a secret group - go to the 'Add Group' settings. You will find this on the left side of the screen.

Click on Add Groups and you a screen will pop up asking you for the details: 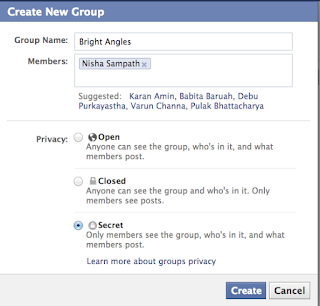 Invite the members and hit "secret' as your privacy setting and Bingo! You will be saved from the prying eyes of your digital neighbours.
Posted by Black Coffee at Thursday, May 30, 2013